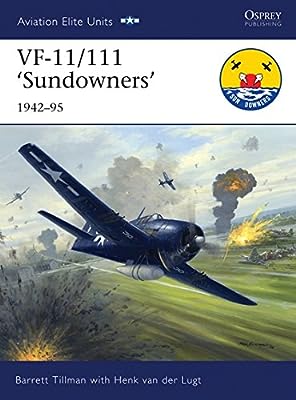 Price: $25.95
As of 2020-01-27 16:28:56 EST (more info)
Product prices and availability are accurate as of 2020-01-27 16:28:56 EST and are subject to change. Any price and availability information displayed on http://www.amazon.com/ at the time of purchase will apply to the purchase of this product.
Buy Now from Amazon
Product Information (more info)
0 0
CERTAIN CONTENT THAT APPEARS ON THIS SITE COMES FROM AMAZON SERVICES LLC. THIS CONTENT IS PROVIDED 'AS IS' AND IS SUBJECT TO CHANGE OR REMOVAL AT ANY TIME.

Fighting Squadron 11 was established at San Diego in August 1943, beginning a half-century record that spanned aerial combat in three wars from the piston to the jet age. First deployed to Guadalcanal, the 'Sundowners' flew Grumman Wildcats and completed its tour as the Navy's third-ranking F4F squadron in terms of aerial victories.

Upon returning home, the 'Sundowners' transitioned to Hellcats in preparation for a second combat deployment. In 1944-45 the squadron flew from USS Hornet (CV-12), participating in the fast carrier strikes against the Philippines, Formosa and the Asian mainland. It finished the war as the Navy's 11th ranking fighter squadron with 158 credited victories.

Redesignated VF-111 in 1948, the 'Sundowners' converted to F9F Panthers and scored history's first jet-versus-jet victory over Korea in 1950. After the armistice, the squadron flew FJ-3 Furies and F11F Tigers, before receiving the world-class F8U Crusader in 1961. During the long Vietnam War, the 'Sundowners' logged six deployments, scoring MiG kills in both F-8s and F-4 Phantom IIs.

From 1978 to disestablishment in 1995, the 'Sundowners' flew F-14 Tomcats from USS Kitty Hawk (CV-63) and Carl Vinson (CVN-70), completing a record of 37 deployments from 17 flattops in its 52-year career. From World War 2 until after the Cold War, the 'Sundowners' established an unsurpassed record 'at the tip of the spear' in naval aviation history.

FLYING FROM MY MIND: Innovative and Reco...

He 111 Kampfgeschwader on the Russian Fr...