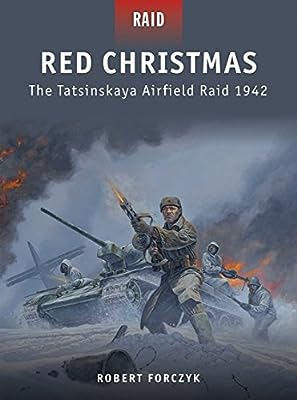 Price: $18.95
As of 2020-01-15 04:41:59 EST (more info)
Product prices and availability are accurate as of 2020-01-15 04:41:59 EST and are subject to change. Any price and availability information displayed on http://www.amazon.com/ at the time of purchase will apply to the purchase of this product.
Buy Now from Amazon
Product Information (more info)
0 0
CERTAIN CONTENT THAT APPEARS ON THIS SITE COMES FROM AMAZON SERVICES LLC. THIS CONTENT IS PROVIDED 'AS IS' AND IS SUBJECT TO CHANGE OR REMOVAL AT ANY TIME.

In mid-December 1942, the Soviets had surrounded the German 6th Army in Stalingrad but the Wehrmacht was engaged in a desperate relief effort with Operation Winter Storm and an airlift. The Soviet Stavka moved to defeat both these German efforts in order to ensure the rapid destruction of the 6th Army and to maintain strategic momentum. As part of the effort to defeat the airlift, the Soviet Stavka decided to launch a deep raid with the entire 24th Tank Corps to seize the airfield at Tatsinskaya, the primary operating base for the German airlift.

On 17 December 1942, the 24th Tank Corps advanced toward Tatsinskaya and seized the airfield on Christmas Eve. The Soviet tankers managed to destroy many Luftwaffe aircraft on the ground, but afterwards found themselves isolated and out of fuel behind German lines. Generalfeldmarschall Erich von Manstein rapidly organized a counterattack with elements of two panzer divisions, crushing most of the raiding force between 26-28 December. Just before the raiding force was annihilated, they received permission to abandon their heavy equipment and escape back to Soviet lines on foot. Thus, the raiders accomplished their mission of severely disrupting the airlift to Stalingrad, but at the cost of decimating an entire tank corps.