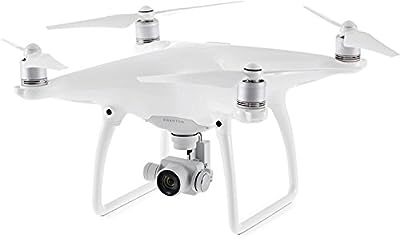 Price: $1,999.00
As of 2020-05-15 10:07:25 UTC (more info)
Product prices and availability are accurate as of 2020-05-15 10:07:25 UTC and are subject to change. Any price and availability information displayed on https://www.amazon.com/ at the time of purchase will apply to the purchase of this product.
Availability: Not Available Discontinued
Buy Now from Amazon
Product Information (more info)
CERTAIN CONTENT THAT APPEARS ON THIS SITE COMES FROM AMAZON SERVICES LLC. THIS CONTENT IS PROVIDED 'AS IS' AND IS SUBJECT TO CHANGE OR REMOVAL AT ANY TIME.

A sleek new design with magnesium unibody construction, obstacle avoidance sensor, dynamic range enhancing video modes, and a two-point-of-contact gimbal mount are just some the features DJI have introduced with the Phantom 4 Quadcopter. Thanks to improvements in efficiency as well as its intelligent power management system, the quadcopter boasts up to 28 minutes flying time. Its camera shoots DCI 4K (4096 x 2160) video at 24/25 fps and UHD 4K (3480 x 2160) at up to 30 fps. There is also a 120 fps mode in 1080p resolution for slow-motion effects. The camera will also take 12MP still photos in either DNG RAW or JPEG, with single shot, HDR, burst, and time-lapse modes to choose from.

Computerized flight control is nothing new, but the Phantom 4 is the first Phantom to be given a pair of eyes. Among other features, these front-facing visual sensors enable obstacle avoidance during automatic return home and allow it to track a subject. It also features Vision Position, a carryover from the Phantom 3 Professional and Advanced, which provides navigation for times when GPS is unavailable and the quadcopter is close to the ground.

One area where fixed-wing planes have traditionally held an advantage over multi-rotors is performance. The Phantom 4 aims to shake off this stigma. With its Sport Mode, the quadcopter can achieve a top speed of 44.7mph. That's enough speed to take to the races or follow fast-moving subjects, such as a vehicle or skier hurling down the slopes. Since you may need to slow down in a hurry, Active Braking brings to the quadcopter to a halt much faster than drag alone otherwise would.