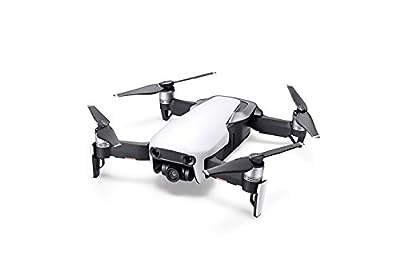 Please choose from the options above to see price and availability.

Product Information (more info)
0 0
CERTAIN CONTENT THAT APPEARS ON THIS SITE COMES FROM AMAZON SERVICES LLC. THIS CONTENT IS PROVIDED 'AS IS' AND IS SUBJECT TO CHANGE OR REMOVAL AT ANY TIME.

A marvel of engineering and design, the Mavic Air was built to go wherever adventure takes you. Inheriting the best of the Mavic series, this ultraportable and foldable drone features high-end flight performance and functionality for limitless exploration.

The Air seems to take visual cues from the Spark, featuring smoother lines opposed to harder edges like the Mavic Pro, however, it doesn't make it look any less serious, in fact, the Air looks amazing in it's three available colors, Arctic White, Flame Red, and Onyx Black.

The Air also brings many new features that the Spark and Mavic Pro do not have. This isn't just a new Mavic with a few new firmware updates or novelties. DJI listened to feedback and redesigned a new drone from the bottom-up, and redefined what it means to be a photography drone.

Let's go into detail of the many features the DJI Mavic Air has.

The Mavic Air is the most portable DJI drone to house a 3-axis mechanical gimbal, with its angular vibration range reduced to 0.005°. Set in a triangular formation, gimbal dampeners help create even steadier shots.

In addition to Horizontal, Vertical, and 180° panoramas, the Mavic Air stitches 25 photos together in just eight seconds to create crystal-clear 32 MP Sphere panoramas.1 View them from an immersive perspective with DJI Goggles.

The Mavic Air shoots video at an incredible 4K 30 fps, recording at 100 Mbps to capture every second with UHD qualit