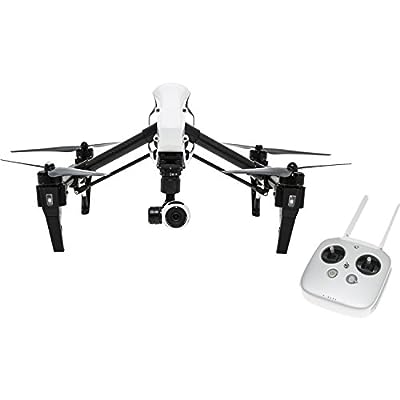 Price: $2,050.00
As of 2020-05-15 14:36:49 UTC (more info)
Product prices and availability are accurate as of 2020-05-15 14:36:49 UTC and are subject to change. Any price and availability information displayed on https://www.amazon.com/ at the time of purchase will apply to the purchase of this product.
Availability: Not Available Discontinued
Buy Now from Amazon
Product Information (more info)
CERTAIN CONTENT THAT APPEARS ON THIS SITE COMES FROM AMAZON SERVICES LLC. THIS CONTENT IS PROVIDED 'AS IS' AND IS SUBJECT TO CHANGE OR REMOVAL AT ANY TIME.

Capture 4K video and take 12-megapixel still photos from the air with the DJI Inspire 1 Quadcopter Drone with Integrated Camera and 3-Axis Gimbal. Forgoing the fixed landing gear design found on many earlier quadcopters, the Inspire 1 features a retractable arm system whereby the underside of each prop motor has a foot to act as a landing pod when the arms are lowered. In-flight, the arms lift up to provide the camera an unobstructed 360-degree view. A 3-axis gimbal keeps shots steady and the camera pointed the same direction as the quadcopter banks and turns. The camera records internally to microSDHC/SDXC memory cards (16GB included) and can also beam a live 720p feed to a mobile device running the DJI Lightbridge app or a monitor or FPV glasses with an HDMI input.

As with many other multi-rotor systems, the Inspire 1 relies on a GPS-based stabilization system that - thanks to spatial awareness - is able to hold a position even when experiencing wind interference, can compensate for overzealous pilot inputs to help avoid stalling, automatically brings the aircraft home in the event of signal loss or at the press of a button, and makes possible a number of semi-automated flight modes that can be enabled through the app. There is also an "indoor" mode which relies on Optical Flow technology - essentially a special camera - provide stability indoors or in other contexts where GPS is unavailable.

Advanced Ready-To-Fly Design: Imagine holding the future in your hands. Designed to be powerful while lightweight, flexible while providing the stability you need, the Inspire 1 is DJI's most advanced and cutting-edge product. Modular Gimbal and Camera: Inspire 1's gimbal and camera can be removed from the aircraft for safe transport and future upgrades. Modular Gimbal and Camera: Inspire 1's gimbal and camera can be removed from the aircraft for safe transport and future upgrades. Aerodynamic, Transforming Design: Carbon fiber arms give you the strength to maneuver in the air, and they transform, moving out of the camera's way at the flick of a switch. So you now have a full 360 degree unobstructed view, allowing you to capture shots independent of the direction you are flying. Every part, every component of the Inspire 1 was engineered to be durable and light weight. The body's aerodynamic design cuts through the sky and further enhances your control over the aircraft. This ensures long flight times and a long flight life. New 4K Camera and Gimbal System: Get crystal clear imaged with DJI's most advanced camera to date. The Inspire 1 shoots 4K video at 24-30FPS, or 1080P at 24-60FPS, and captures photographs at up to 12 megapixels. The 1/2.3 inch CMOS sensor brings out the best of whatever you're shooting, and the 94 degree wide-angle FOV lens allows you to compose your shots perfectly. Holding your camera, DJI's years of expertise on camera stabilization has been poured into the Inspire 1's 360 degree 3-axis rotating gimbal. This ensures your photos and video are clear and stable in almost any filming environment, even when performing daring maneuvers or flying in less-than-ideal conditions. Powerful Remote Controller: Take absolute control of your Inspire in the air with DJi's most sophisticated remote controller to date. Featuring dedicated buttons for photo and video capture,a gimbal control dial, and intrgrated rechargeable battery and more, it's easy and intuitive to fly. For and even greater level of precision, use a second remote controller (optional) and fly with a friend. With two people controlling the same Inspire 1, one person pilots the flight path, while the other aims the gimbal and camera. Each user can have their own screen to see exactly what is being shot in real-time. By working in tandem, you're capturing shots that are more complex shots and are more artistic than ever before.