Baby Einstein - On the Go - Riding, Sailing and Soaring 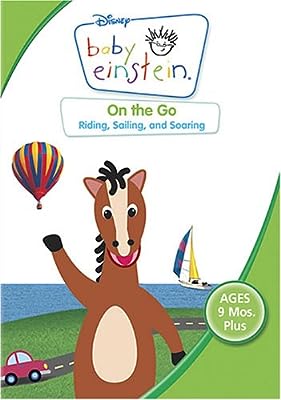 Price: $14.99
As of 2020-01-19 18:00:05 EST (more info)
Product prices and availability are accurate as of 2020-01-19 18:00:05 EST and are subject to change. Any price and availability information displayed on http://www.amazon.com/ at the time of purchase will apply to the purchase of this product.
Buy Now from Amazon
Product Information (more info)
0 0
CERTAIN CONTENT THAT APPEARS ON THIS SITE COMES FROM AMAZON SERVICES LLC. THIS CONTENT IS PROVIDED 'AS IS' AND IS SUBJECT TO CHANGE OR REMOVAL AT ANY TIME.

ASIN: B000AAF1UE DESCRIPTION: A fun-filled introduction to things that "go!'
-- Introduces cars, planes, trains and more
-- Exposes little ones to the concept of transportation

As little ones become increasingly mobile, their fascination with all things that move intensifies too. On the Go Riding Sailing and Soaring exposes babies to the different ways people travel -- on land, by sea, and in the air -- while it presents them with captivating real-world images, funny puppet shows, and beautiful classical music by Beethoven, Haydn, Mozart and Rossini. So whether your little one is piloting toy planes, revving up choo-choo trains or boating in the bathtub, this delightful and interactive introduction to "things that go" will transport both of you to a world of fun and discovery you can explore together! END

Baby Einstein celebrates things that go--from trains and planes to boats and bikes--in this 40-minute foray into the world of transportation for the toddler set. Called a "digital board book," the film is divided into segments of land, air, and sea. The deliberately paced scenes feature classical music by great composers (such as Haydn and Mozart) integrated with puppets, live action, and computer animation. Early learning words scroll across the screen with voice-overs available in three language tracks. In one scene, a pastel-colored animated rowboat morphs into an open sea adventure of speedboats, cruise ships, and sailboards. In another, three kids sing the familiar "Wheels on the Bus" as puppets step onboard a brightly colored coach. The train sequence starts with a child pushing a toy choo-choo before expanding into footage of steamers, locomotives, and high-speed trains. Such a visual feast not only entertains young ones but also helps them make critical brain connections, say experts. The Baby Einstein Company has grown up from its 1997 beginnings, having been acquired in 2001 by Disney and its behemoth marketing savvy. While the film is as high quality and interactive as ever, the content gives greater emphasis to computer graphics (with spin-off merchandising opportunities) and lesser attention to its original cornerstones of stylish imagery, art, poetry, and singularly classical compositions. "The Wheels on the Bus" is hardly Beethoven, though youngsters certainly won't complain. (Ages 2 to 4) --Lynn Gibson

ON THE GO -- RIDING, SAILING, AND SOARING introduces babies and toddlers to the different ways people travel -- by land, air, and sea. From cars to trains, boats to planes, and more, this fun-filled introduction to transportation will expose little ones to "things that go," while captivating them with vibrant, real-world images, delightful puppet shows, and beautifulical music by Beethoven, Hadyn,