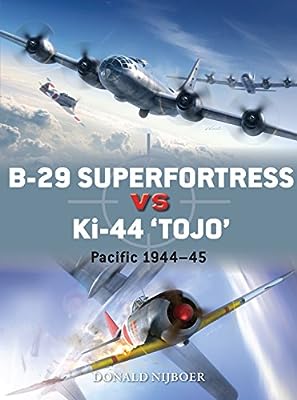 Price: $20.00
As of 2020-02-15 17:30:17 EST (more info)
Product prices and availability are accurate as of 2020-02-15 17:30:17 EST and are subject to change. Any price and availability information displayed on http://www.amazon.com/ at the time of purchase will apply to the purchase of this product.
Buy Now from Amazon
Product Information (more info)
0 0
CERTAIN CONTENT THAT APPEARS ON THIS SITE COMES FROM AMAZON SERVICES LLC. THIS CONTENT IS PROVIDED 'AS IS' AND IS SUBJECT TO CHANGE OR REMOVAL AT ANY TIME.

By the time the Americans began their aerial bombardment of Japan in 1944, both the JAAF and IJNAF were spent forces. What the Japanese did have though was the Ki-44 "Tojo." Armed with two 40 mm cannon, it was the most heavily armed and feared single-seat fighter to see action against the new American bomber, the B-29 Superfortress. For the bomber crews, they had what they believed was their "ace in hole": a fully armed B-29 carried four remotely operated gun turrets and a tail gunner's position, making it the world's most advanced self-defending bomber.

In every respect the Ki-44 pilots were fighting a desperate battle. Many who made their mark did so using suicidal ramming attacks or "Taiatari." Illustrated with full color artwork, this volume examines why the Ki-44 was unable to break up bomber formations conventionally during the Pacific War, and how its ramming tactics, while terrifying, graphically revealed Japan's inability to stop the B-29.

Mustang and Thunderbolt Aces of the Paci...