A Chain Of Events: The Government Cover-Up of the Black Hawk Incident and the Friendly-Fire Death of Lt. Laura Piper 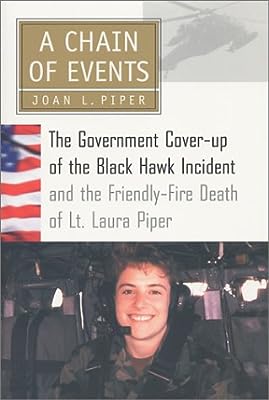 Price: $18.95
As of 2020-01-24 16:28:12 EST (more info)
Product prices and availability are accurate as of 2020-01-24 16:28:12 EST and are subject to change. Any price and availability information displayed on http://www.amazon.com/ at the time of purchase will apply to the purchase of this product.
Buy Now from Amazon
Product Information (more info)
0 0
CERTAIN CONTENT THAT APPEARS ON THIS SITE COMES FROM AMAZON SERVICES LLC. THIS CONTENT IS PROVIDED 'AS IS' AND IS SUBJECT TO CHANGE OR REMOVAL AT ANY TIME.

On April 14, 1994, on a clear morning over northern Iraq's no-fly zone, two U.S. Air Force F-15 jets encountered two U.S. Army Black Hawk helicopters on a routine mission. Within ten minutes, the F-15s misidentified the helicopters and shot them down with fire-and-forget missiles. For three years, aircraft had patrolled these skies with a near-perfect safety record. Although the Black Hawk's downing was one of the worst air-to-air friendly fire incidents involving U.S. aircraft in military history, the Air Force would officially conclude the pilots had made a reasonable mistake.

One victim was ebullient twenty-five-old intelligence officer Laura Piper, in love with life and with being an Air Force lieutenant. Movingly written by her mother, A Chain of Events is the story of Laura’s final flight and the Air Force’s mishandling of the subsequent investigation. It is a story of duty, patriotism, a mother’s devotion to a daughter’s memory, and her family’s disappointment in a beloved institution.